I just picked up the new Framework laptop a few weeks ago and wanted to write up a quick post to highlight its awesomeness.

The Framework laptop does what virtually no other laptop has done for me in the past; allow easy upgrades, in much the same way I’ve been building and upgrading my desktop computer for the last 20 years. I’ve never been afforded the same upgradeability in a laptop, which is just sad. Framework changes that. For the first time, I’m excited in the longevity of my investment and thrilled at the notion of a mobile platform that will let me continuously upgrade it, at least that’s the idea sold to us. Whether Framework stays around for the long haul will remain to be seen but I’m hopeful.

The website allows for some heavy hardware customization, even allowing you to replace the mobo and CPU with new hardware combos as they become available, a true industry first as far as I’ve ever seen. In addition to the awesome openness and plug n’ play modularity of the platform, Framework introduces expandability in the form of hardware modules that can be easily inserted into open modular bay slots on the underside of the laptop as can be seen below. There are a number of different “cards” to choose from but I opted for several USB C, HDMI, storage, and USB A cards. The storage card comes in 250GB and 1TB variants. I intend to use these to store other bootable operating systems for now but can foresee wanting modular file storage as well.

After installing the NVMe, memory, and Wi-Fi modules, I booted up to my Ubuntu 21.10 flash drive and got to work installing a fresh copy of the OS. Everything went buttery smooth and after a quick package update and reboot I was ready to rock and roll. I noticed the trackpad button wasn’t working out of the box and needed to add some packages to get that working. Apparently the embedded fingerprint reader (also serving as the power button) doesn’t work natively as well but I didn’t get around to testing that as I didn’t have areal big need to utilize that.

All-in-all, I love this thing so far and looking forward to years of use out if it. Framework just announced that they have opened up their “Marketplace” and extended it to third-party and community devs too!

On a side note, I purchased some slick aluminum Anker USB C to USB A adapters to use in all my USB C ports in the event I need additional USB A ports. I love these things and fairly cheap on Amazon. 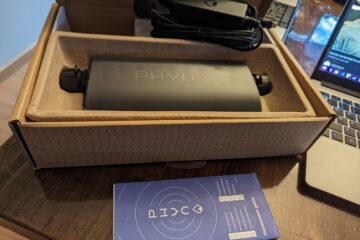 Smart Water Assistant So I’m looking to upgrade my water situation here at home. Having a well water system in place, Its always been a pretty critical thing to me to keep tabs on the Read more…